Recently both the NCAA and the NFHS have mandated  a new typ of plant box area padding. Here is an historical account of our work in this area. 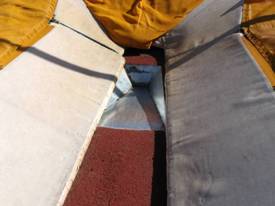 Toby Stevenson elite US vaulter lands in the box at an internation meet in Oslo, Norway. Suffers broken ribs is hospitalized, recovers and wins the Olympic Silver medal in 2004.

Kevin Dare dies from a fall into the plant box at the Big 10 Indoor meet at U of Minn.

Ed Keefe, lands in the box and fractures his hip at the Big East Indoor champs.

Ryan White Lands in the box at Univ So Conn Jr Olympic meet is paralyzed from the wait down for life.

NCAA and NFHS mandate larger landing mats as a result of numerous accidents and a new ASTM specification.

Lacey Jansen, FSU vaulter, with good coaching,  lands on her back in the plant box, suffers a broken tail bone and ribs,  at the USATF outdoor nationals at Stanford. She recovers and vaults again at a high level after a years recovery.

Elite Vaulter,  Paul Jensic, Air force Acamemy vaulter, with good coaching,  is badly hurt landing in the box at the University of Nebraska. Suffer broken hip and other injuries, recovers and vaults again.

A vaulter in India, (Singh) is paralyzed landing in the box.

After 3 years of soft box investigation and testing many drawbacks have emerged, some of them appear to compromise safety.

Increase the amount of padding protection with in, and around the plant box, with out interfering with pole entry, or pole rotation. Secondarily, provide a collar which is independent of the pit and does not shift around.

A Washington HS vaulter (Couch), with good coaching,   is badly hurt landing in the plant box. A law suit results after hospital time. 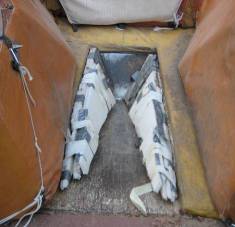 1. The 1970 rule change which angled the plant box side walls and strike plate was done so to allow the pole to bend with out damaging the bottom. The rule also disallowed the placing of towels, t-shirts and other objects in the box as a means of protecting the bottom of the pole.  However this rule greatly increased the amount of hard surfaces.

2. All landing pad designs appear to provide very poor protection around the perimeter of the box area, this seems to be a result of increasing the taper of the front buns and not providing a adequate common top cover. As the open cell foam padding gets thinner in these areas its easy to feel the ground under foot when you step on these areas. Some MFG’s say their brand does not require a collar. Yet hard or poorly padded surfaces are present.

3. All box collars at this time do not seem to offer much protection and commonly slide back leaving a large amount of unprotected area around the box.

5. Typically, elites want to slide the front bun sections back to allow the pole to bend freely. However, this always leaves a large unpadded area just behind the box. USATF does not have a box collar rule.

6. Serious and catastrophic injuries from falls into the box area are still a concern.

A Washington HS boy (Couch)  is badly hurt landing in the box at a HS with a box collar in Washington state. Suffers broken vertebra, and files a lawsuit.

Fall 2007 ~
Job #1 Determine if it is possible to place padding with in the plant box with out interfearing with pole entry, bending and rotation. Experiment with many different shapes and materials…Make Foam side wall pads of various shapes and have PV club members  vault with them. (5700 vaults)

Atascadero PV camp ~ 80 participants record over 1400 vaults using interior padding with 16” wide front opening and 3” wide strike plate exclusively  at the camp. Many questions were asked but all participants adjusted and vaulted successfully and safely. Bring my foam inserts to Bloom and Maine South winter clinics. After a few questions all participants adapt and both clinics are a success.

Spring 2008 ~ Experiment continues with 20” wide front opening and 3” wide pole strike area  is used at all club pole vault activities and day camps over 10,000 vaults are recored with only a few questions from those who have never seen this unique set up.

Ryan Morberg a HS vaulter in Washington State is killed landing in the plant box.

I Show David Hodge  @ Gill athletics  my prototypes. Continue to experiment with size and shapes of interior wall padding. Ashley Whittaker,  former U of I vaulter,  and Gill engineering dept member begin work on the first of many prototypes.

Get first factory collar: with upper interior wall padding . IT is made of 2” rebounded foam, but no angled tapers around pole bend cavity,  and insufficient padding on side walls.  We immediately see the need for more padding and combine our foam interior pads with the collar for best results. The front opening during this phase was between 20 and 22”. Much of our testing during this phase centers around how wide the front opening needs to be which relates directly to how thick the padding can be in this area.

Mike Seaman, U Tenn, lands short at a college meet at U Ky. Broke L3 and 4 severely and  sprained ankle. Recovered and continued vaulting.

Extensive experiments consisting of  “on purpose” plants on to side wall padding (Sam, Mike, Lisa, Chelsea ) at Cuesta College, and SJVSC in Atascadero, Ca  and others participate in 8 sessions of mis-plants.  Result: in all cases pole tip descends into bottom of the box without incident.

The second Gill prototype arrives;  with tapered bend cavity thicker foam and more foam on side walls it appears much more protective.

Hartnell JC vaulter (Hixon) at at Fresno City college land in the box and suffers broken ribs and a punctured lung, he is hospitalized and recovers.

Experiments begin with the distance between the space between the wings at the front of the pole bend cavity. It is noted that the pole may brush these padded areas if they are too close. This of course is undesirable, but a min and max dimension must be determined for both the purpose of safety and uninhibited pole rotation.

I bring Sample collar to 5 pole vaulting camps (7500 vaults). Show to National HS Federation at summer rules meeting in Indianapolis. Explain to them about our testing and that we are filing a patent.

Send samples to several independent testers including some of the most notable PV programs and coaches : Hagerstown CC, San Diego State Univ,  Kiss the Sky PV club, Phoenix Az, Univ of Washington, Cuesta College, Ca. Atascadero HS, Univ of Illinois, San Ramone  HS , and SUNY Cortland.   From the observations made by these people several minor design changes were made. 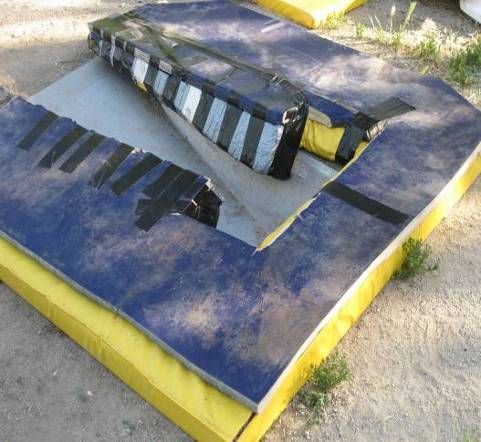 4230 vaults recorded at SJVSC on final prototypes at SJVSC in addition to . Gill begins to sell Safety Max Collar under patent pending status.

NFHS representative tells me they want an ASTM for the collar before they will require it.

Begin experiments with  improving shock attenuation. (we use many combos of  dense close cell foam combos and HDPE plastic on top of various foams.  Results seem to indicate that the protection offered by all existing collars and the inside of front bun sections is extremely poor, (including the newly designed Safety Max collar 48 programs purchase collars. All reports are very good.

Brandon Miracle a Jr HS vaulter in Texas tip catches a lip on the box, his hands slip off the pole just after T.O.  and he lands on his back in the box . Suffers a sever head injury and spends several weeks in recovery.

It is noted that the winged collar does not continually slide back because the wings help hold it in place, however, it does have an annoying tendency to continually creep into the middle thus narrowing the plant able opening at the front of the box. We continually have to kick it back to proper position. It also tends to become water logged. Our testing programs also make the same observations.

Charles Yin, a college beginner, with a experienced coach, lands off the side of a landing pit in a college league championship meet in Illinois and dies. 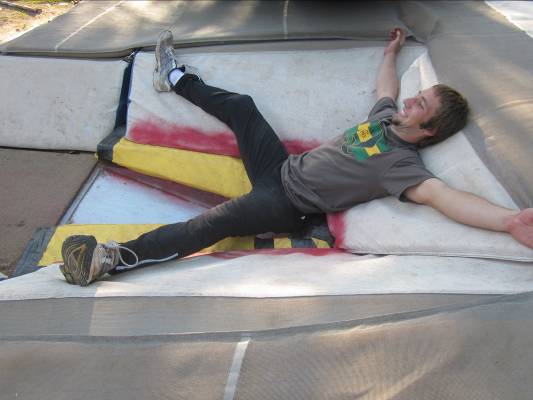 James Vollmer- 14' college vaulter with an experienced coach,  lands in the Box at Jamestown college and is paralyzed.

Eric Sollin in Norway lands in the box and receives sever leg and hip injuries and nerve damage.

Some officials’ are questioning its legality because of the "no objects in the box rule "(also a result of the 1970 rules changes),  which actually were referring to the placement of towels and other objects in front of the strike plate to help reduce the grinding of the bottom of the pole on the top of the strike plate.

A NJ boy, ( De La Paz),  lands in the box, in practice,  trying to get on a bigger pole. He suffers sever head injury.

Texas Tech Vaulter with good coaching, in full view of a large crowd  lands on his back in the box hard in front of at the Mt Sac Relays. He is carried off in an ambulance but does not sustain a catastrophic injury and apparently has recovered.

NCAA T&F rules committee Chairman (a former vaulter) says he likes the idea and will show to the committee at the next meeting. The appreciate the work that has been done.

Above~  Room to bend!

ASTM F2949  for “winged plant box collars” becomes reality as it clears the final round of F08 ballots. Some of the design features are truly landmark in PV safety . It does the following:

1. Creates names for the various parts of a collar never before labeled.

3. Sets minimum shock attenuation values for all surfaces, including: the interior side walls, the wings and the area behind which now may possibly  be interpreted as the de-facto “in side the box” minimum requirement.

4. Sets a size ranges for the pole bend cavity, pole slide area, front opening and over all thickness.

5. Indicates that collar wings which extend into the box  provide increased protection.

6. Increases the size and the shock attenuation beyond the collar Gill is currently selling by wide margins. 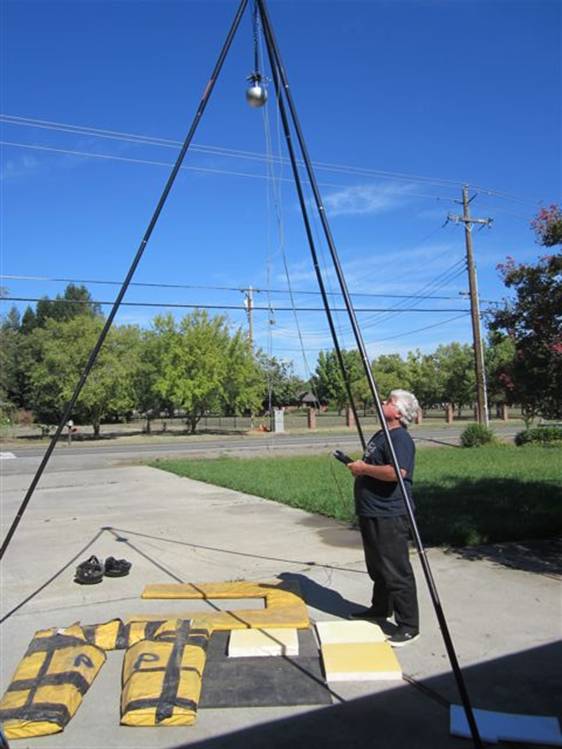 NCAA prop committee recommends its use by December 2013.

A female vaulter in the Bay area (Peterman) catches her tip on the front exposed edge of a plant box at American River college and is hurt and spends hospital time but recovers.

Fall 2012 ~ Gill produces a collar made of superior padding materials than the previous version, which tests in the 950 HIC range. Additionally it does not absorb water and is more rigid so that it does not creep in to the front of the box.

Nathan Schuck  a HS senior in Indian has his pole tip catch on the lip of the plant box and is knocked out landing in the plant box.

214 additional collars are sold, collars previous to fall 2013 do not meet some of the F2949 specifications for size or shock attenuation.  New collars which do meet F2949 will be so marked.

Kay Clark landed in box on elevated board runway indoors  at Baldwin Wallace Univ.  with no collar. She sufferd torn cartilage and a sub-luxed ribs.

ASTM PV Sub committee vote to up hold the F2949 standard in spite of efforts by UCS to have it withdrawn.

ASTM votes again to up hold F2949 pole vault box collar standard after Bruce Cranner a lawyer for the USATCCA again attempts to kill the specification.

Box collar is used in the NCAA meets all across the country with out a problem. Additionally several reports of falls into the plant box are reported without injury.

For information contact This email address is being protected from spambots. You need JavaScript enabled to view it.

Or get applications at www.skyjumpers.com 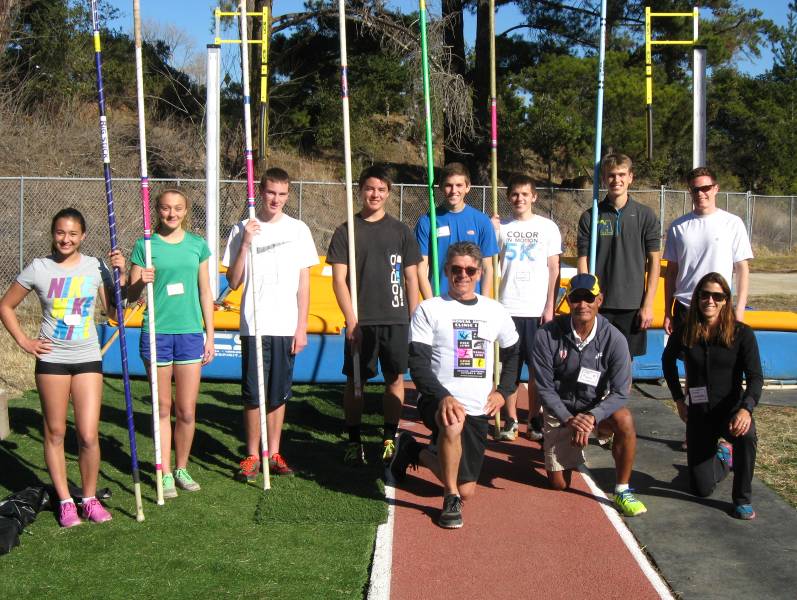