P2 History of the Plant box

P4 Foreign items in the box

The goal of this very important project has been to eliminate all future serious and catastrophic injuries in the plant box area. We think this objective can be met by no longer allowing any pole vaulting with unpadded horizontal or slanted surfaces in the plant box area. The project objective has been to pad as many of these unpadded, or poorly padded, areas as possible without great expense to those who sponsor or participate in the pole vault.

Above: NCAA Champions Chris Swanson and Kasey Burlingham demonstrate the two classic landing short body positions and how in the box padding can help protect – spring 2011

The Safety Max Plant box collar first began development in the fall of 2007. The original intent was to provide increased padding both around, and inside the plant box with out negatively affecting the size of the pole slide (planting area), or the bending of the pole along the top back inside edges and rear of the plant of the box.

History of the Plant Box

The plant box pre-1970, offered more than enough space to plant the pole safely, in fact the width of the top of the box specified in the old rule is in fact the same size as today's modern pole slide. The dimensions of the pole vault box were first specified in the rules in 1926 and were unchanged for almost 50 years dating back to the days when far heavier bamboo and metal poles were used. 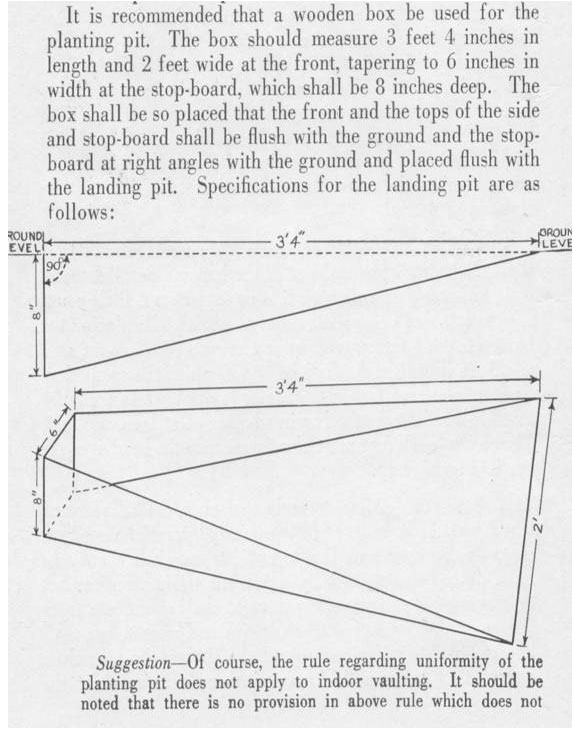 Note, that these non bending vaulters manipulated far heavier poles and slid their hands together as they planted the pole to take off. Planting the pole today is much easier with super light weight poles and no hand shift. So, as a result, we elected to pad the side walls so that the traditional pole slide was open.

Below: Note the way this Collar prototype does not go over the boundaries of the traditional pole slide area 24” ”front x 6” back shown by the cardboard insert.

The Plant Box Changes of 1970 created more hard surfaces to land on, and eventually, 40 years later, the need for more padding in those areas. Our research shows that only the area around the stop board needs to be flared.

It has been our observation that the 1970 rule change, which flared the sides, and the rear of the plant box to allow the pole to bend, and thus rotate to vertical with out grinding the bottom 9" of the pole on the top inside edges of the back of the plant box (AS MUCH). Please note, that poles still grind on this area as they bend and rotate to vertical.  All poles, both then and now show signs of wear and tear from grinding top of the back of the box, and many times will break off, if too worn. This is of course evidenced by the sale of protective devices for the bottom of the pole and taping of the bottom.

Foreign Materials in the Plant Box

In the 60's, many vaulters would place a folded towel or t-shirt, in the bottom of the back of the box. This would help cushion the pole strike and slightly reduce the grinding of the on the back of the box slightly.  Many arguments would break out concerning if it was ok or not to use this method.

Some vaulters in the 1960’s even went so far as to carry special taped wood or metal blocks from meet to meet, and set them in the bottom of the box next to the stop board  to create more space from the stop board. When the flared box rule went into effect in 1970 so began the no foreign objects rule.