How Far Back Shall The Padding Be?

The answer to this question should be so that no hard surfaces are exposed around the plant box. But instead, the answer in the modern PV world is not good. This started during the 60’s and early 70’s, when many landing pads had completely vertical fronts, and no, or very small slants into the box area.

The vertical front fronts of these pits were commonly recognized as pole stoppers. When the bottom 2 or 3 feet of the pole hit the landing pads too hard, the vaulter could stall out.

Above:  Paul Wilson checks his standards 1966. Note the 90 degree stop board and no front buns.

As a result; during that time frame, (1970's and 80's), it became popular to slide the pads back as much as 12" or more, behind the top of the rear of the plant box. This of course would leave a large area of hard surface behind the box.

Below: Derrick Hintch Cuesta College & Arizona State, note bottom of pole bending well beyond top of back of the stop board. 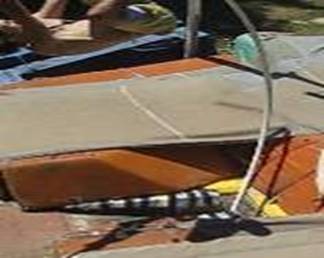 Later in the 90's tapered front sections, around the sides and back of the box became popular and eventually tapered fronts became the rule, and it created a unhealthy paradox of common sense among many elite vaulters. 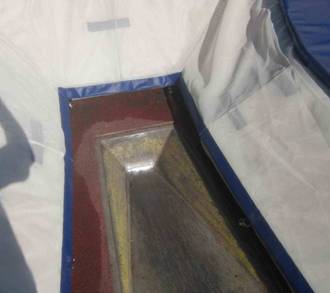 Throughout the history of the event, pole vaulters have always attempted to grip the pole as high as they were able. With fiberglass poles this necessitated moving the landing pads back to create space for the bottom of the pole to bend, and rotate. Thus was created the deadly paradox: move the pits back to let the pole bend, and if you come up short, land on pavement!

Above, the vast majority of serious in the box accidents, paralysis and deaths are the result of landing onto the unpadded areas in and around the plant box.  Sadly in 2011 this is how many facilities look.

Even with all these changes to landing pads, many still offer very poor padding around the perimeter of the box. Our study of the known serious, in the box accidents indicates that the over whelming majority of injured vaulters would have had a much better outcome with better padding in the right areas. Equipment is now available for testing shock attenuation, or the ability of materials to decelerate a falling body. Additionally, new materials are now available which do a marvelous job of reducing shock. These materials can be molded into the shapes necessary to pad (to an advanced level) the areas around and inside of the plant box. Over the past two years, we have tested over 30 different materials, including PV base unit sections, front bun sections, padded boxes, perimeter padding and many different kinds of foams. 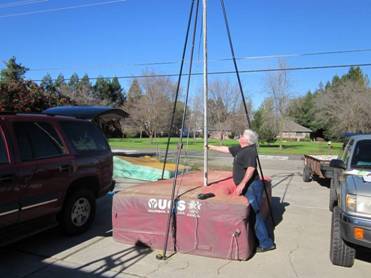 These were among the first steps to better understand padding materials, and ultimately offer better protection to the vaulter. Very soon, we will go back to do more testing so that we can better describe the shock attenuation standards for landing pads. This must be done to assure that our industry standards are the best possible. (ASTM; American Society For Testing Materials)

At the beginning of the project several prototypes were made from closed cell, and Styrofoam. These pieces were inserted into the plant box and watched very carefully over 6 months of practice jumping in the fall 2007, and spring 2008. 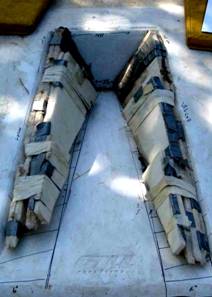 Many shapes, sizes, and material combinations were tested.

The initial users were members of SJVSC pole vaulting club in Atascadero, California. All SJVSC club members participated, their personal bests ranged from 6 to 18 feet. During this time frame video analysis was done and general observations were made. We felt the results were positive and so we elected to go forward with refining our padding apparatus.

Approximately 13,000 test vaults were observed, using a wide variety of test shapes and materials. These were done at several facilities in Atascadero, and Chicago Heights, Illinois. Early in the testing it was noted that successful vaults were recorded with padding placed into the sides of the box which only allowed only a 12” opening at the front and a 3” open unpadded space at the stop board area. Not a single vault using this test method was ever a failure due to the pole contacting the side wall padding. 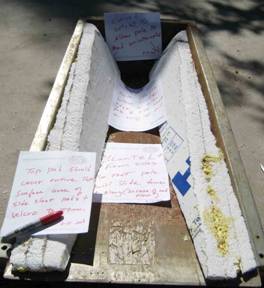 Pole plant accuracy was at no time a problem; this was true both among beginners and elites. It also became obvious that a space must be left open to the sides of the front of the stop board area, for the pole to bend into the corners of the box. It was noted that in fact, sometimes the pole actually swings all the way around in to the side of the box approximately 6” from the corners, (see photo below). So it became important to leave this area open for back and side rotational pole movements. These early experiments led us to believe that the plant box does not need to be as large as it currently is. It was also noted that until 1970 the plant box did not have flared sides, thus giving it the appearance of being smaller. However, since that time the bottom tray of the plant box has remained the same size, only the sides have flared giving the appearance of being wider but in actuality the pole slide size (the bottom tray of the plant box) has remained the same since plant boxes were first mandated in 1926.

1. By padding the inside walls only a portion of the way down and by tapering the front edges of the wings up slightly, a pole may slide under the padding and along the side rails to the bottom. During our 4 plus years of testing at SJVSC including both[W1] club vaulting and summer camps we have yet to see a pole planted this way. [PM2] 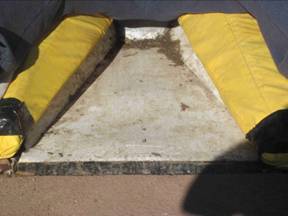 2. We experimented with interior padding thickness by doing video analysis of several mock-ups. We looked at many slow motion videos from a variety of angles to determine the width of the opening between the interior pads right where the pole cut out begins. We determined the optimal distance that allows all poles to pass without touching the padding. Soon many of these videos will soon be posted at pole vault safety @ face book. 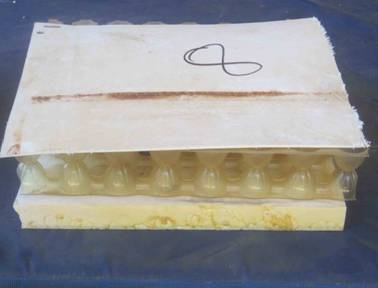 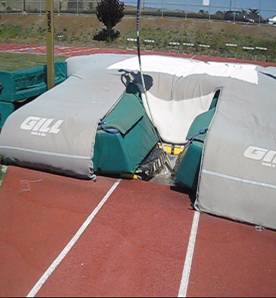 These early experiments went on for approximately 50,000 vaults, we employed several elite male and female vaulters, who bent the pole a lot as special interest participants.

Below: Note the extreme position of the bottom on a bending pole as it swings around in a circle. Although this kind of bend is very unusual it was important in development. Also, note taper on edges of rim padding. 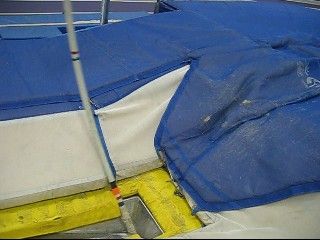 3. Although only a very remote possibility, we studied the effects of planting on the side wall padding in the spring of 2008. Approximately 300 full vaults and 200 drills were observed and video taped using a variety of materials and configurations. The subjects intentionally “bad planted” into the side wall padding. It was our observation from video analysis that some types of foam were possibly too soft and the pole seemed to have a higher likelihood of becoming imbedded. However, since the angle of incidence was so acute the possibility seems remote.

Below: Mike Hollis Cuesta College, San Luis Obispo, Ca. Planting on, and under the side pads one of the early prototypes (18” wide front opening spring 2008. 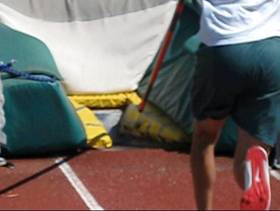 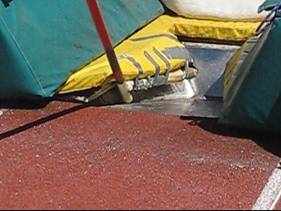 Later it was determined that 3” of padding with a 1/8” Hi modulus plastic cover, cased in vinyl,  offered the best solution to this highly unlikely problem.

4. Next we began testing different kinds of padding materials to find the optimum padding which could be shaped and carved into the shapes we needed. Most important of all was to provide an angle at the rear of the plant box and to each side of the sides into which the pole bends. 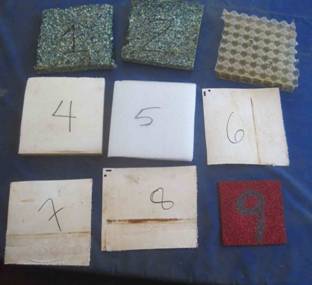 5. We wanted to provide increased protection directly under that portion of the landing pads surrounding the plant box. It has been our observation that no landing system that we had observed in the past 10 years offers sufficient protection around the perimeter of the box. We felt that by offering a perfectly fitted collar three inches thick with the right kind of materials and by narrowing the opening at the top of the box 3” on each side and in other key areas, a large improvement in safety is gained.

[W1]In the beginning we thought this might be a problem, so we experimented, as time went on we saw no evidence of a problem. ~jj~